The new Cold War will not reverse globalization

LightCounting releases May 2022 State of the Industry Report

LightCounting’s presentation at OFC 2021 suggested that the US sanctions against Huawei, announced in May 2020, where a de-facto declaration of the new cold war. Few believed us a year ago, but it has become more apparent now with the escalation of a war in Ukraine – a typical “cold war proxy conflict”. Russia may be still a superpower judging by the nuclear arsenal, but it is not a superpower by the 21st century standards. Russia would have never invaded Ukraine, if it were not for a silent approval from China and all the economic backing, which comes along with it.

While the new cold war will not be an exact copy of the previous one, it may be just as dangerous. Advances in new technologies, such as AI, robotics, drones, and 5G, are the “arms race of the 21st century”. Access to the latest CMOS manufacturing facilities is treated today the way access to nuclear know-how was treated in the past. We even have a new “disputed tropical island” (Taiwan now, Cuba then). It would be funny if it were not so dangerous.

There is one new element in the current cold war, which has not existed in the past. Both superpowers (China and the US) are committed to sustaining growth in the global economy, since prosperity of both countries depends on it. This may be a great balancing factor for the new cold war if the governments are smart enough to take full advantage of it.

The global economy is so interconnected now, that it cannot revert to what it was before China joined the World Trade Organization in 2000. A brief history of our industry offers a great example of how quicky the world changed over the last two decades.

The Figure below illustrates the changes in the TOP10 list of optical transceiver suppliers over the last 12 years. A majority of the Japanese and US-based suppliers exited this market by 2018, while Chinese vendors led by Innolight improved their rankings. Innolight is sharing #1 and #2 ranking with II-VI in 2021, because the difference between them is less than accuracy of our estimates for their revenues from sales of optical transceivers and active optical cables.

The 2021 list includes Cisco, which completed its acquisition of Acacia in early 2021 and Luxtera a few years before that. It also includes Huawei (Hisilicon) since we reversed our policy of excluding modules manufactured by the equipment suppliers from our analysis. 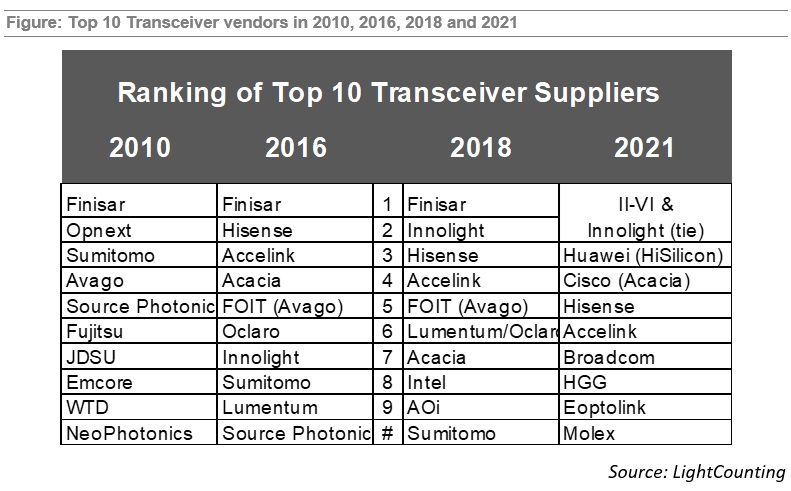 Suppliers of optics based in China are starting to move some of their manufacturing to other countries in Asia in order to avoid US customs tariffs and continue to support their customers in the US. Huawei and many other Chinese companies on the “US entity list” are investing heavily to develop a local supply chain for optics and electronics. One of the industry insiders interviewed by LightCounting commented that “the whole country (of China) is working day and night to make sure that Huawei has enough IC chips”.

Huawei has commented on having challenges accessing the latest CMOS technologies, but it continues to ship high-end products, including coherent DWDM modules. It is very unlikely that Huawei is still relying on a reserve inventory of CMOS chips accumulated ahead of the sanctions. Some compromise must have been agreed upon by the Chinese and the US governments.

We hope to see many more such compromises in the future. As long as the global economy remains a priority for both China and the US, the new cold war will not be as severe as the old one. Companies focusing on the global market will be the most successful, despite all the barriers along the way. The market size matters and there is no substitute for access to the global market and global trade.

This State of the Industry Report provides a holistic analysis of the global communications industry, during a period of unprecedented growth in demand for broadband connectivity and the rise of Cloud companies. It examines business strategies of traditional telecom service providers and Cloud/Web2.0 companies, as well as their suppliers of networking equipment and optical/ electronic components.