Despite severe headwinds, China is pursuing its economic ascension and 5G aspiration

The report provides an update on the 5G developments in China, including macroeconomics, geopolitics, and technology. Neither COVID-19 nor 5Geopolitics seems to derail China’s ascension so far, despite the loss of access to key chipsets and the fresh massive COVID-19 lockdowns. Our full year 2021 analysis found that China’s economy grew 8.1% in 2021 driven by domestic consumer spending and robust exports of goods. In the U.S., the GDP grew 5.7% after a COVID-19-induced 3.4% contraction in 2020. This suggests China remains on track to surpass the U.S. as the world’s largest economy in the 2026-2028 timeframe because COVID-19 reset the GDP race between the U.S. and China by giving China a boost.

“Without a solid expansive telecom infrastructure, this economic ascension would have never happened; as 5G is the key enabler of China’s digital economy, 5G rollouts have remained stable so far. However, 2022 has started with significant headwinds that are slowing China’s economy and compromising its 5.5% planned annual GDP growth: government crackdowns on various industries starting with tech, finance and tutoring companies and tighter control over property developers.” said Stéphane Téral, Chief Analyst at LightCounting Market Research. 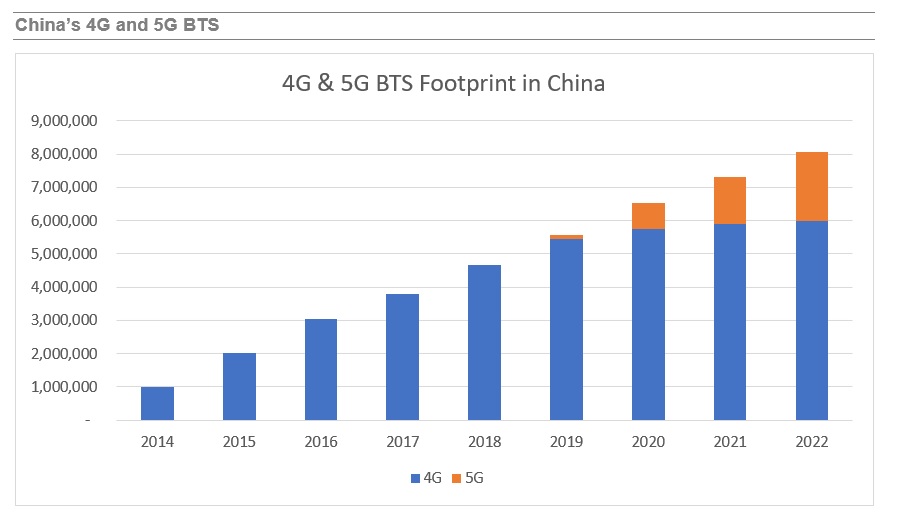 LightCounting’s China Wireless Infrastructure and Macroeconomics report focuses on 5G developments in China, including macroeconomics, geopolitics, and technology. The publication date is scheduled a few weeks after the 4 services providers (China Broadcasting Network, China Mobile, China Telecom, China Unicom) provide their annual reports so that we can gather many details about 2021 and provide a 2022 outlook and a 5-year forecast. This report also includes RAN vendor market shares and analysis.