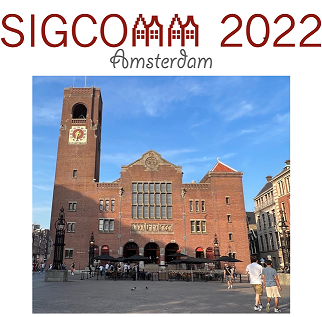 Summary and highlights of the Sigcomm 2022 networking conference held from August 22-26 in Amsterdam, The Netherlands.


Venue for the Sigcomm 2022 conference: The Beurs van Berlage is a former stock exchange built by The Government of Amsterdam at the end of the 19th century.


Google is using optical switching in its data centers. The hyperscaler made the revelation at Sigcomm.

"We have eliminated the spine layer in favor of directly connecting the aggregation blocks in a mesh," says Rui Wang, a co-author of Google's Sigcomm paper.

Now, Google has revealed that it started using optical circuit switches in its data centers five years ago.

Google has since shifted all its Jupiter data center deployments from the classic three-tier Clos interconnect architecture to a mesh-based one using optical switching.

The spine - the top layer of the classic three-tier Clos architecture - is the core traffic aggregation and interconnect layer linking tens of thousands of servers in a data center. The spine's core networking role requires that it is architected before the data center comes online.

Data centers are continually being updated with servers, top-of-rack switches, and aggregation blocks. Unfortunately, the upgrading causes the spine to become a performance bottleneck as the links of newly added aggregation blocks fall back in speed to match those of the spine. Equally, upgrading the data center's spine is impractical given the lengthy disruption and lost revenues.

The full text of the research note is available to LightCounting subscribers by logging into their accounts.