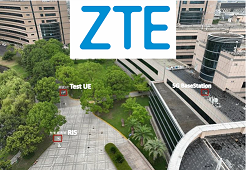 Applying the law of refraction known as Generalized Snell’s Law to meta-materials, ZTE has developed a Reconfigurable Intelligent metaSurface (RIS) that can redirect a millimeter wave beam to circumvent obstacles, and hence guarantee its path such that the performance of the connected user equipment (UE) remains unaffected. Simply put, the surface of the meta-material acts as a reflector so that the RIS enables a precise beamforming of the reflected beams to follow the connected UE.

As we all know in the mobile industry, millimeter waves, defined as electromagnetic (EM) waves with a frequency ranging between 30 and 300 GHz, are hard to tame due to their insubstantial propagation characteristics such as path loss, diffraction and blockage, rain attenuation, atmospheric absorption, and foliage loss patterns. However, as they provide huge swaths of capacity, millimeter waves became a key component of 5G spectrum allocations and have been widely adopted in fixed wireless access (FWA) services in North America and are getting traction in other countries. Indeed, according to the Global mobile Suppliers Association (GSA), as of the end of June 2022, 218 mobile operators in 87 countries/territories have launched commercial 3GPP-compatible 5G services (mobile or FWA), including 83 FWA services. Despite the abundance of commercially available repeaters and boosters for millimeter-based services, ZTE’s new RIS brings much needed relief allowing user equipment to unleash the untapped millimeter wave spectrum’s potential, and perhaps unleash mid-band bandwidth as well. Let’s start our analysis with the toughest and yet the largest capacity supplier: millimeter waves.

In any given area, the RIS reflects the millimeter wave radiation

That way, millimeter waves can go beyond FWA and address various types of use cases that have been left to the mid bands so far. Adequately configured and programmed for each specific use case, the RIS guarantees the millimeter coverage both outdoors and indoors and therefore brings millimeter waves as a new valid option to existing mid-band 5G use cases. In indoor locations for instance, the beamforming coordination between the millimeter wave base station (BTS) and the RIS distributes the network performance uniformly across the targeted room. The RIS is equipped with a controller that receives the instructions from the BTS.

By definition, a meta-material is any material engineered to possess a property that cannot be found in existing materials in the universe. However, the designed meta-material needs to be digitally controlled to obtain the desired functionalities. As specific coding sequences of the meta-material create the ability to manipulate EM waves, the RIS starts with an array composed of multiple antenna elements to which the opposite phase concept is added through a 2-bit coding approach. This design provides phase control to each antenna element independently and various codebooks are available to address multiple beamforming options. Put another way, the coding manipulates EM waves through different sequences of 0 and 1 that affect the phase and therefore the direction of the beam, which can be adjusted in 3 distinct modes:

It’s also worth noting that power consumption is zero in static mode and remains low in semi-static and dynamic modes.

It started in 2021 when the China Mobile Research Institute and ZTE successfully completed the first stage of static RIS technology prototype verification, and initially explored the feasibility of RIS technology to improve fixed-point coverage in 5G blind spots and other weak areas.

Then in 2022, the China Mobile Research Institute and ZTE conducted the test of a dynamic RIS prototype equipped with collaborative beamforming capabilities and achieved the industry's first technical verification both in the laboratory and in the field. The core of this technology is that the BTS delivers information such as beam IDs to the dynamic RIS through the air interface to guide it to dynamically select and switch beams to achieve dynamic beam scanning and beam tracking.

In both lab and field testing, it was verified that the beam of the RIS could accurately follow the user in real time, and that the signal strength and rate remained stable. Compared with verification results from the first-stage static RIS technology prototype verification, which can only improve fixed-point coverage, the dynamic RIS collaborative beamforming technology greatly improved the BTS coverage and supported seamless user connections in mobile scenarios.

The RIS can come in many flavors

Depending on the use case and its environment as well as the beam adjustment mode, ZTE has designed a planar RIS that uses PIN diode and liquid crystal elements:

In addition, the RIS can be applied in a transparent planar configuration that facilitates its installation on a glass surface such as a window for example or in a bendable format to be attached to curved objects. All in all, it is sufficiently adaptive to address as many situations as possible and therefore foster the deployment of millimeter waves beyond their current FWA use case.

That’s not all, the RIS lowers the cost and cuts the carbon footprint

While the concept of developing the RIS started with the goal of solving the millimeter wave propagation issue, other attributes rapidly emerged. Taking a macrocell BTS as a benchmarking baseline, ZTE’s active RIS performance testing produced a 30% reduction in capex and power savings, and the deployment time was shortened by 50%. During the testing, absence of the RIS led to a clear degradation of the initial throughput which was restored with the presence of the RIS. In addition, by design, the RIS also diminishes the carbon footprint when compared to that of a typical macro BTS, including during its installation.

And finally, the RIS is neither a repeater nor a booster

As the RIS is a method of wireless communications that just reflects an analog millimeter wave signal and does not amplify it, nor does it perform analog-to-digital conversion before transmitting the reflected analog millimeter wave signal, it does not fit the repeater definition. On the one hand, the RIS communicates with a BTS through a set of antennas configured with a specific beam configuration selected from a beamforming codebook that includes multiple beamforming configurations. On the other hand, the RIS communicates with one or more pieces of UE after controlled reflections enabled by other sets of antennas and beamforming configurations ranging from static, semi-static to dynamic modes as previously described. In the end, the RIS simply dodges any obstacles that can either block or alter the analog millimeter wave signal emitted from a BTS before reaching its final destination, which is one or several UEs.

That way, the RIS costs less than the repeaters and boosters currently added to millimeter wave networks. And as it eliminates the need for additional BTS, the RIS also generates more significant cost savings.

Bottom line: RIS will be a game changer

At the very least, the RIS adds a new low-cost tool to the millimeter wave toolbox such that the promise of 5G can be truly realized. But the RIS can do more than that: ZTE also demonstrated that it can deliver the same level of performance in the mid-band spectrum. And this is very good news since the pace of 5G rollouts continue to exceed that of 4G, both the demand for bandwidth and the users’ expectations remain high.

Looking at both the success of 5G so far and the millimeter wave-based FWA uptake reported by the GSA, there is a good reason to believe that every communications service provider (CSP) in the world should embrace the RIS to sustain high capacity performance in as many venues as possible, both outdoor and indoor. Imagine yourself enjoying a video session over a 1Gbps pipe from a millimeter wave outdoor BTS, then moving inside without noticing any change, that’s the real power of the RIS.