AI Infrastructure to drive ICP spending in 2022, after record results in 2021

Sub-title: LightCounting releases a research note on ICP spending in 4Q21 and 2022

Early Q4 2021 earnings reports are in, and the top U.S. Internet Content Providers (ICPs) continued to rack up impressive gains in revenues in the fourth quarter of 2021, just as they did in Q3. For the 7 ICPs that have reported – Alphabet, Amazon, Apple, Meta, Microsoft, Oracle, and PayPal – revenues grew 15% compared to Q4 2020, with Alphabet, Apple, Microsoft, and PayPal all reaching new heights. Five of the seven grew sales more than 10%, while Amazon grew 9% and Oracle was up 4% on a year-over-year basis.

Q4 2021 capital expenditures for the 7 collectively rose 24% year-over-year, with Amazon, Meta, and Oracle spending record amounts. Spending increased sequentially at five of the seven, with Apple coming off an anomalously high level in Q3, and Alphabet falling 6%.

Cloud services continued to drive revenues at Alphabet, Amazon, Apple and Microsoft, for the group growing 9% sequentially and 30% year-over-year, and each one of the four growing 24% or more compared to last year. Amazon Web Services achieved record revenue for the 34rd quarter in a row, up 40% versus the year-ago quarter. Alphabet, Apple, and Microsoft all set new cloud sales records also.

Microsoft also mentioned the role of Artificial Intelligence in its business on its earnings call, claiming to have “one of the most powerful super computers in the cloud.” Also like Meta, Microsoft has its eyes on the metaverse. In late January 2022, it announced its planned acquisition of Activision Blizzard in an all-cash deal valued at $68 billion. On the earnings call, it explained why: “We are investing to make it easier for people to play great games wherever, whenever, and however they want, and also shape what comes next for gaming as platforms like the metaverse develop.”

LightCounting has been tracking and reporting on the Internet Content/Commerce Providers (ICPs) for the past eight years, and from the very beginning, our projections indicated that the spending of the top 15 ICPs would eclipse that of the top 15 CSPs at some point in the not-so-distant future. While Q4 2021 financial results are still incomplete, it appears that the spending crossover point may have taken place in 2021, and if not, will certainly happen in 2022.

While this historical spending growth is truly remarkable, it also begs a very important question: will this ICP spending growth continue? To reflect the uncertainty around this variable, LightCounting defines three scenarios. The best case is that ICP infrastructure spending continues at recent rates. This requires that: 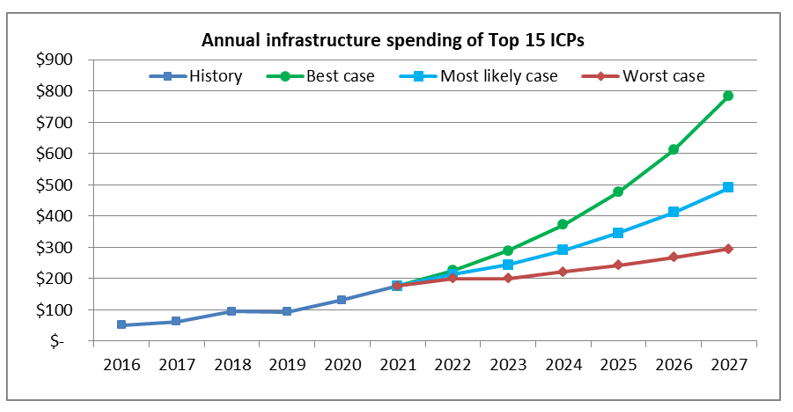 If the best case for Top 15 ICP infrastructure spending is that it continues to grow at its historical CAGR of 28%, the worst case is a marked and ongoing reduction in the rate of spending growth. The most likely outcome is somewhere in the middle, which is 19% annual spending growth. The scenario modeling results are shown in the chart above.

More detailed Q4 2021 results, and our assessment of ICP spending for 2022-2027 are discussed at length in our recently published Research Note “AI Infrastructure to drive ICP spending in 2022, after record results in 2021”, available to LightCounting clients.