Recession looms, yet record OC sales are projected for Q2 2022

With all companies’ earnings now reported for Q1 2022, the results show that the optical components industry continued to benefit from strong demand, despite supply issues constraining sales for many. Solid guidance for the current quarter, shared by some of the suppliers, suggests another record in the making for Q2 2022.

Top Internet Content Providers (ICPs) had what for them is an “off” quarter, with revenues down sequentially from the record set in the fourth quarter of 2021 but growing 11% year-over-year. ICP capex was also down modestly from Q4 but still increased by 28% versus Q1 2021. Continuing slowdown is likely in Q2 2022 and second half of 2022.

Amazon admitted in April that aggressive investment in warehouses and infrastructure had left it with excess capacity, as growth in ecommerce started to slow down. The company expects 2% decline in Q2 2022 revenues. Alibaba and Tencent announced layoffs, while Google and Meta put new hiring on hold.

Yet, Eoptolink and Innolight reported sequential declines in Q1 2022 sales and these must be related to slower than expected sales of 400G DR4 to Amazon. The company deployed more than 1 million of 400G DR4 transceivers last year and had plans to triple these deployments in 2022. It seems that these plans were revised in Q4 2021 and current demand for 400G DR4 at Amazon is significantly weaker than expected.

Is this a sign that Amazon is starting to scale down its investment in infrastructure?

The recession of 2008-2009 had a major impact on sales of optical transceivers to Cloud companies, as illustrated in the figure below. At that time, Google was the only Cloud company deploying optics. This project had just started in the end of 2007 and was put on hold at the first sign of a recession. The peak reached in Q1 2008 was only $15 million, so the impact on the total market was marginal. In contrast, Google spent close to $1 billion on optics in 2021 and Amazon spent more than that. If Cloud companies were to put deployments of optics on hold now, the $8 billion optical transceiver market would crash. 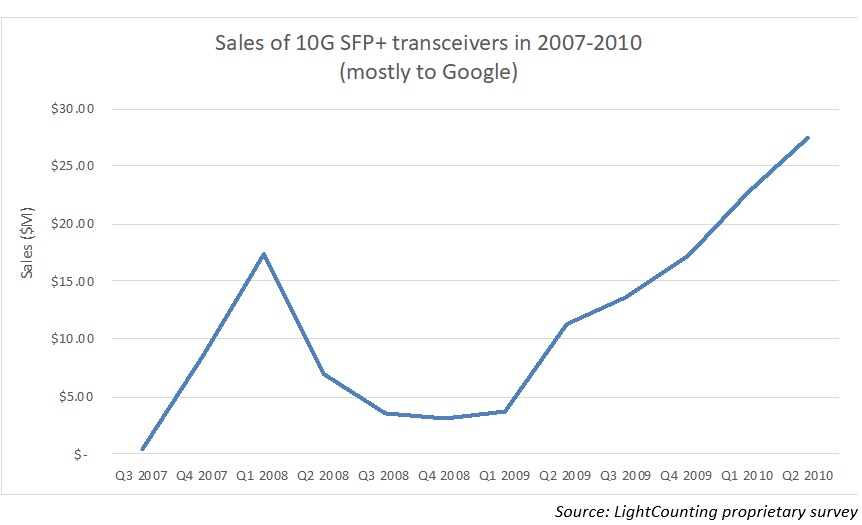 Will this time be different? We think so. Optical connectivity is critical for datacenters supporting the huge operations of the Cloud companies. AWS is by far the most profitable part of Amazon’s business. Development of new applications based on AI are essential for future growth. These projects will be among the last that Amazon, Google and Meta put on hold, if a recession or fear of one forces them to cut spending sharply.

Demand for optics at Google and Meta remains very strong and we expect that Amazon will accelerate deployments of optical connectivity in the second half of 2022. Strong support for continued investment in datacenters and AI was expressed by several of the biggest cloud companies during their conference calls:

The optical transceiver market will not remain immune to a prolonged economic recession, but demand for optics from the leading Cloud companies should be steady.

CSPs as a group saw revenues basically flat in Q1 2022 compared to Q1 2021, and lower than Q4 levels as expected due to seasonality. CSP capital expenditures were also seasonally down from Q4 but 6% higher than the previous year’s quarterly total, which is an above-average growth rate.

Network equipment maker sales were also down sequentially but rose 8% year-over-year collectively. Adtran, ADVA, Ciena, and Fiberhome all reported double-digit y-o-y growth. Ciena, Infinera, Juniper, Nokia, and Ribbon all said sales would have been higher if not constrained by supply shortages.

Semiconductor makers as a group had the best results of the six segments we track, with another sales record of $46.4 billion vs. $45.5 billion in Q4 2021, up 31.6% year-over-year. Of the 13 companies in this group, all set new sales records, except for MACOM and Intel’s Datacenter Group. A cynic might suggest that semiconductor makers are taking advantage of the supply/demand imbalance by holding or raising prices.

LightCounting’s Quarterly Market Update (QMU) is a detailed analysis of the most recent quarter reported by companies in the optical communications industry. It consists of a PowerPoint slide deck and Excel workbook with quarterly sales for many companies in the industry, including CSPs, ICPs, network equipment markers, and optical and semiconductor components vendors. The QMU also contains the latest results of LightCounting’s proprietary optical transceiver vendor shipment survey, with units, prices, and revenues of more than 150 transceiver product types.

The Quarterly Market Update is available to LightCounting clients at: www.lightcounting.com