The wonders of AI – Gold Rush of the 21st century

The NVIDIA GTC event was held on-line a week before the first hybrid supercomputing event opened its doors in St. Louis, MO, on November 14th. Both events were exciting: AI is the Gold Rush of the 21st century, but the technologies supporting it are in a state of flux. Nvidia is doing great selling GPUs (the shovels of the 21st century?), but if the company can stay ahead of the coming changes remains to be seen.

Access to High Performance Computers (HPCs) is no longer limited to governments and national research labs. Applications of HPCs and AI range from finance to health care to manufacturing. Cloud companies use it for recommending products and targeted advertising. Can one system handle such a variety of applications? Not really.

Even a single application relies on several different tasks, illustrated in the figure below. Each of the tasks is best accomplished by a different combination of GPUs, CPUs and High Bandwidth Memory (HBM). Having a reconfigurable system supporting all these configurations would be great, but such a system does not yet exist. Not to mention that new applications can emerge in a few years, making the best systems of today irrelevant for the future. It is more than a gold rush, the industry is aiming at a moving target. 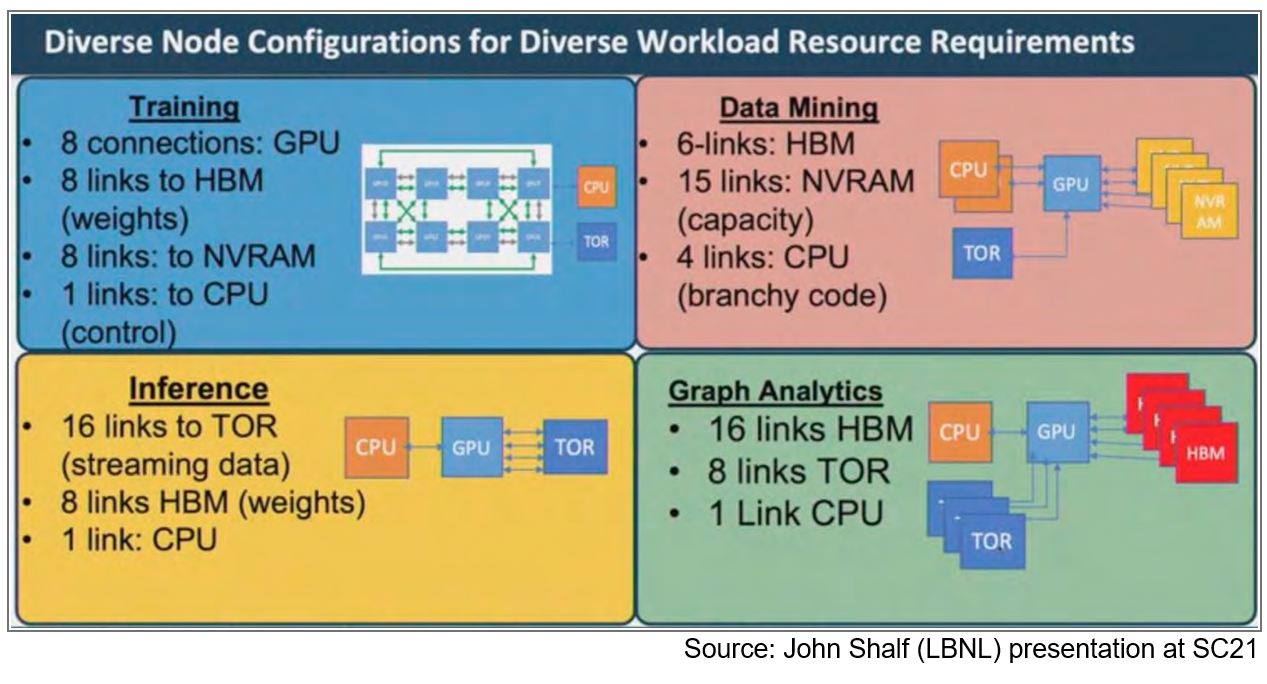 A majority of the experts agree on one requirement for future HPC and AI systems: high bandwidth interconnects and an increasing share of these will be optical. Low power E/O conversion, high density fiber connectors remain the barriers for wide adoption of optics, but optics are fantastic for reconfigurable systems. ROADMs have been widely deployed in telecom networks for more than a decade now. Will HPCs and AI clusters take advantage of that?

This was one of the topics discussed in a session titled “Resource disaggregation in HPCs” at SC21. Karen Bergman of Columbia University presented the latest results of her research on silicon photonics interconnects and optical switches. Ayar Labs presented their optical interconnect solutions and hinted on first deployments next year. We are looking forward to seeing that in 2022. It is always just around the corner, isn’t it?

LightCounting will update forecast for Co-Packaged Optics (CPO) in December 2021 and it will be released with the following report: “High Speed Cables, Embedded and Co-Packaged optics”

Other topics discussed in this research note include: