Despite a notable 5G pause in 2Q22, the world’s first open vRAN nation pursues its conquest of the world

LightCounting’s latest report focuses on Japan’s wireless infrastructure market and analyzes the implications of the introduction of Rakuten Mobile and the Japanese government’s open RAN push.

Led by Rakuten Mobile that built an open vRAN network from scratch, and NTT DOCOMO that introduced open RAN in its brownfield network by forcing its incumbent vendors to open their interfaces, Japan is the world’s first open RAN nation and boasts the most advanced cloud-based technologies: open RAN BTS accounted for 42% of total units deployed in 1H22, mostly driven by 4G. By contrast, due to natural disasters that worsened the existing supply chain issues, 5G took a deep dive in 2Q22.

“Despite the unexpected bump in their domestic market, NTT DOCOMO’s OREC initiative and Rakuten Symphony stay their international expansion course, so do Fujitsu and NEC. Both vendors continue to build their international clout with their open RAN product portfolio and system integration services,” said Stéphane Téral, Chief Analyst at LightCounting Market Research.

We maintain our view that Japan’s RAN market is vibrant and looking up, shifting from strong 4G rollouts in 2021 to significant 5G deployments this year and next. Our model is based on Japan’s Ministry of Internal Affairs and Communications (MIC) 5G roadmap that points to a surge this year and next, followed by a huge drop starting in 2024. According to the MIC’s long-term plan, the RAN market is expected to bounce back in 2026 and by 2027, open RAN BTS will account for more than 60% of the total footprint. 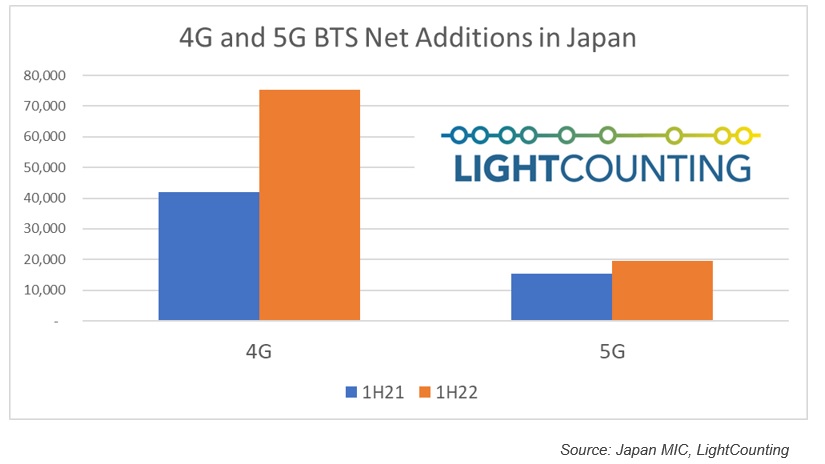 Japan Wireless Infrastructure Report focuses on Japan’s wireless infrastructure market and analyzes the implications of the introduction of Rakuten Mobile and the Japanese government’s open RAN push. The publication date is scheduled a few weeks after the 4 services providers (KDDI, NTT DOCOMO, Rakuten Mobile, and Softbank) provide their financial reports so that we can gather many details about 2021 and provide a 2022 outlook, a 5-year RAN forecast, and a capex outlook. This report also includes subscriber and base station (BTS) numbers and RAN vendor market shares and analysis.