The Sunday workshops at ECOC proved to be very dynamic and informative this year. The new format of a few short presentations followed by a panel discussion at the end of each section worked really well. The speakers were encouraged by fully packed rooms of attendees – a refreshing change from the pandemic years.

Andrew Lord of BT opened his presentation with the topic that has concerned service providers over the last two decades: how to keep up with the growing network traffic when there is no growth in the revenues and capex budgets. The only option is to reduce the cost of networking equipment, but this is getting more challenging every year.

Suppliers of optical transport equipment continue to increase data rates: from 100G a few years ago to 800G now. The next steps are 1.2T and 1.6T systems, which will require 130Gbaud optics and wider spectral windows, resulting in minimal gains is spectral efficiency. Lighting up the L-band is an option, offered by suppliers, but service providers are concerned on whether it will work as well as the C-band and if all the components will be available at the right price. The only alternatives are to light a new string of fiber and deploy more fiber cables – the most expensive steps in network upgrades.

The L-band is a novelty for service providers in Europe, but it has been used in Japan for the last two decades and many submarine and DCI systems use it as well. Colt reported a very positive experience with lighting up the L-band in their networks in Europe earlier this year. It is only a matter of time for the other European service providers to start using it, instead of deploying new fiber.

Every new DWDM channel costs extra, but equipment suppliers promise to continue reducing the cost of optical transport in terms of $/Gbps. For example, if the cost of 1.6T optics in the future remains the same as 800G now, the cost in $/Gbps will drop by 50%.

Edward Echeverry of Telefonica shared their plans for sharing DWDM channels in one network among several service providers. This certainly adds complexity to network management, but it will help to share the cost of new network installations. Clearly, the expense of lighting new fiber is a heavy burden.

Another promise of 400ZR/ZR+ is plugging these modules directly into core routers, eliminating separate DWDM transport equipment. Colt also reported first deployments of 400ZR/ZR+ on routers earlier this year, but other operators have numerous concerns with this strategy. One of these is how to manage DWDM optics on routers. Current systems use different sets of software to manage the IP and optical network layers.

Nokia showed a demo of its new software that offers cross-layer network management to support 400ZR/ZR+ on routers during their recent analyst event held in Orlando, Florida. 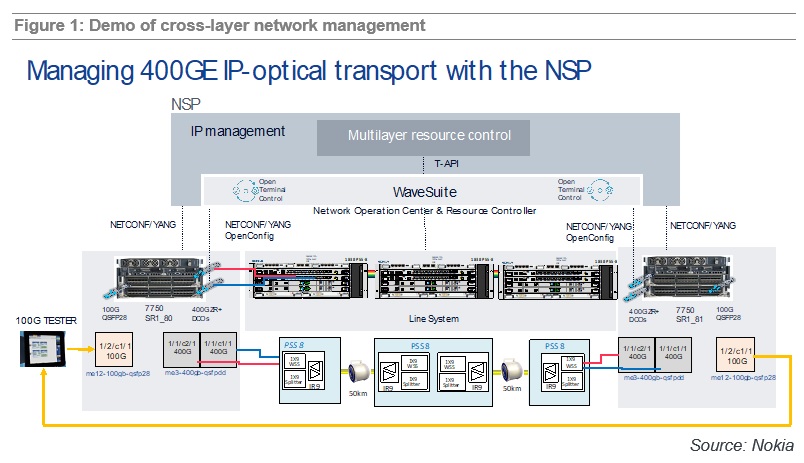 The full text of the research note is available to LightCounting subscribers by logging into their accounts.

LightCounting will publish a separate research note on highlights from ECOC 2022 Exhibition next week.